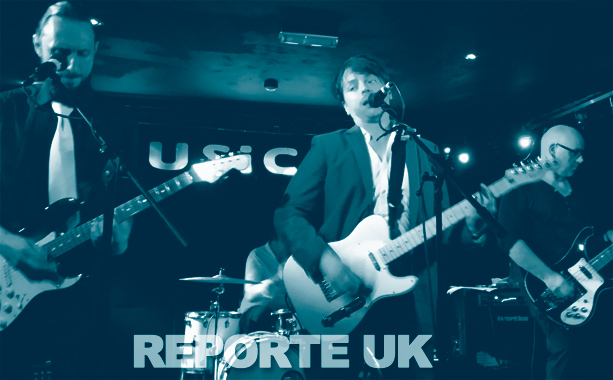 As you may know, every other week I write for La Pop Life recommending some project or event from the United Kingdom. The UK Report (Reporte UK), as it’s formally known, is written by me one week, by Samuel Valdés from Sloucher another week. Sam used to live in Sheffield and I live in Leicester, so each one of us has had the opportunity of meeting local and national bands, attend their gigs and share the findings with you.

In this occasion, I talk about ist, an Anglo-Scottish-Canadian band that had left four years ago and came back for one night a couple of weeks ago.

I was asked to translate the report so they could read it, so here is the English version. If you want to read the original in Spanish, click on the images or on the link above, visit La Pop Life and in passing, check out all the other reports from around the world. 😉

Never say goodbye. ist did it four years ago, and on the 5th of September they played live again.

ist (written like this, all small caps) was born in March 2001 during a drunken meeting in Leicester. Its members Jack Bomb, Detroit Robbins, Mark “Flash” Haynes and the Canadian Kenton Hall chose its (or, in those days, unaltavisteable) name as a way to manifest their lack of prejudice in both social and musical matters, earning comparisons to Stiff Little Fingers, Television and The Clash as well as The E Street Band and Oingo Boingo.

Their first EP was The Adult Tree, written by Hall after leaving his strong religious upbringing and, in the process, his young marriage. While he gathered the band, he recorded a version of each song with the shortly-after disbanded Kyoka. With ist, he recorded everything again and prepared new material for their first LP, Freudian Corduroy, two years later.

In 2004, Bomb left the collective and Detroit lost his life. After a brief time of bereavement, the band prefered to continue with Scottish bassist John McCourt and new guitarist Brett Richardson. The following year, with this new alignment, plus Paul Swannell on the piano, they released King Martha, their second LP and the most downloaded album from Russian website Yanga. The album earned positive reviews, the writers Neil Gaiman and Iain Banks‘ seal of approval, and Hall’s nomination as “Songwriter of Substance” from MOJO magazine.

The year 2006 saw them releasing a double single: the polemic “The Wreck of the Eddie Fitzpatrick/I am Jesus (And You’re Not)”, in response to a conversation with singer-songwriter and radio host Tom Robinson. Meanwhile, the Christmas of 2008 lended its ears to “Let’s Not Fight This Christmas”, cowritten by Hall and performed by Chris Difford, founding member of Squeeze.

In August 2009, Toothpick Bridge was their last LP and one of the most glorified by independent media around the world, including specialised magazine Kerrang! and some platforms from New Zealand and the United States. Nevertheless, the band split up in 2010 and everyone took a different road: Flash with a Beatles tribute, Richardson as a music producer, Hall as an actor and director for film, television and theatre, and McCourt as a member of Mr Plow, under Pink Box Records, the same label that hosted ist all the time.

In spite of Wikipedia considering them pop-rock, there are strong punk explosions in their ideology and sound. However, all over their history they have flirted with genres so disperse as ska, country, blues and classical music.

Their lyrics are complex and funny at the same time, filled with metaphors, parables, autobiographies and local jokes: from Jehovah’s Witnesses to unfaithful housewives and gay cowboys, and from hating Daniel Beddingfield because you just broke up and his stupid song makes you cry, to… Remington Steele!

Their comeback was just for that night in September, for a gig at The Musician – the same place that saw them say goodbye to the stage – as a way to gather funds for LOROS hospice and celebrate Detroit’s life. In the studio, they had briefly got together this year to record two songs for A Dozen Summers, the children’s film Hall has been directing.

Whether or not they re-reunite any time soon, here’s their entire catalogue on Bandcamp for you to listen to chronologically or however you feel like.